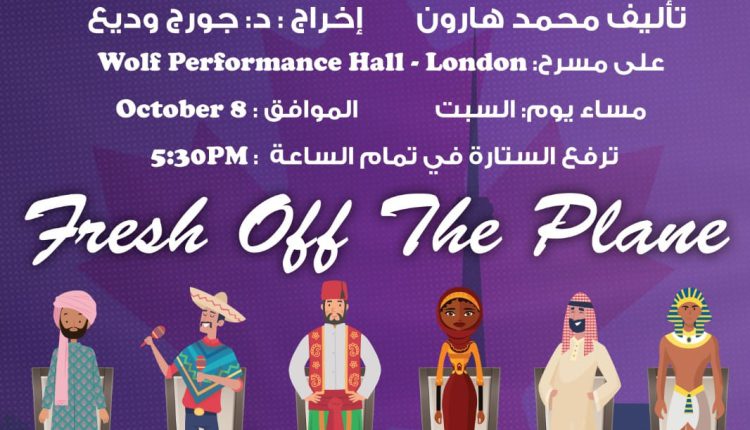 Wolf Performance Hall in London Hosts Fresh off the Plane

The Canadian Arabic Theatre is back today (Saturday, Oct 8th) with its famous comedic play “Fresh off the Plane”, which is a fun and engaging Arabic play addressing the challenges faced by newcomers and immigrants in Canada.

Despite their various backgrounds, the students embark on their shared journey to integrate into Canadian society.  As they try to better adjust, they’re faced with multiple challenges and obstacles including health, education, social networking, and employment shortcomings.

The play takes place in a classroom for teaching English to non-native speakers, which includes a group of recent immigrants from different age groups, and from various professional fields, origins, and ethnic backgrounds, especially a number of Arabs from Egypt, Palestine, Lebanon, Syria, Morocco, and others.

The mix of different cultures gathering all in one Language class creates funny sketches that make the audience burst out laughing. You do not want to miss all the fun, hilarious laughter, and joy.

This comedic play will mainly be presented in Arabic at the Wolf Performance Hall in London, Ontario.

The Canadian Arabic Theatre, in cooperation with the Canadian Palestinian Professional Foundation (CPPF), presented this comedic show last May at the Oakville Centre, AEG Liebherr Auditorium; after a two-year delay due to the pandemic, it was written by Mohamed Haroun and directed by Dr. George Wadee.

The Theatre Director Dr. George Wadee, is an academic professor at the Egyptian Institute for acting. He got his Ph.D. in acting and Theatrical Arts from Russia. He is a recognized member of the Actors Union in Egypt. He is also a member of the Arabs Academic Authors Association. He directed in Madboulizm Theatre as well as Mohamed Negm Comedy theatre. Dr. George was a lecturer at the University in Jordan. He has directed several plays at the musical, comedian, private and public theatres. His plays were performed in most Arab countries.

Mohamed Haroun is an artist and a famous journalist in both the Arabic and Canadian press. He is the editor-in-chief of Sakher Sabeel, a Sarcastic Arabic once a paper version and currently electronic newspaper. He is a well-spoken journalist whose articles are non-political reflecting peace, love, and international respect for all nations. He is also an actor who performed in many plays in Jordan and Many Arab countries. He is the author of several plays that present constructive criticism in a funny subtle style. The play (Fresh off the plan) is his most important work. Above all, he is the executive director of the group Canadian Arabic Theatre for theatrical acting.

Canadian Arabic Theatre is a theatrical group that was established in 2017. It is a not-for-profit organization founded by Dr. George Wadee and Mr. Mohamad Haroun.

Tickets are $40 and for more information and ticket purchases, reach out to the organizers directly.