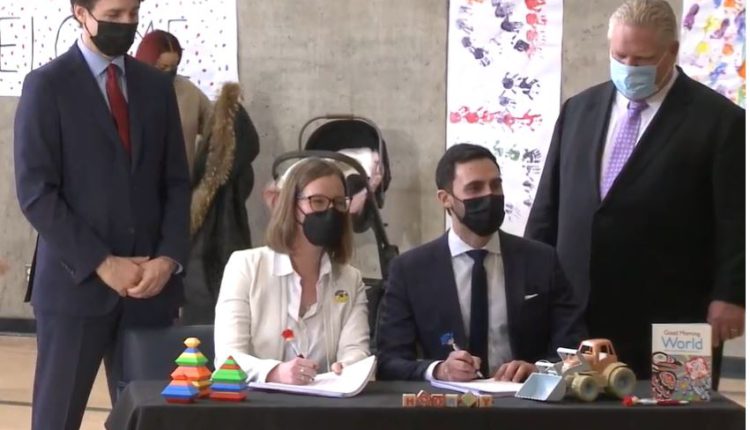 $13.2B Child Care Deal Signed To Lower Fees for Families

Ontario and federal governments have signed a $13.2 billion agreement that will lower fees for families and deliver an average of $10 a day child care by September 2025.

Highlights of Ontario’s better deal include:

·      A federal investment of $13.2 billion over six years with the province having secured more certainty around out-year funding. The deal includes an additional year of funding of at least $2.9 billion.

·      The flexibility to allocate federal funding in a way that will allow the province to deliver an average of $10 a day child care, including by spending the initial $10.2 billion over four years instead of five.

·      Enhanced protection against funding shortfalls through a mandated financial review process in year three – the first of its kind in any provincial child care deal – to reconcile the actual costs of the new national child care plan with funding.

·      Reduction of child care fees through four steps of reduction to an average of $10 a day per child five years old and younger by September 2025.

·      Work with municipalities to enrol 5,000 licensed child care centres and home child care agencies into the program between now and September 1.

“From day one, I said our government wouldn’t sign a deal that didn’t work for Ontario parents and I’m so proud of the work we’ve done with our federal partners to land an agreement that will lower costs for families across the province,” said Premier Doug Ford. “Given how complex Ontario’s child care system is, we wanted to get this right. Today, we’re delivering a deal that will keep money in the pockets of hard-working parents.”

As a first step, all Ontario families with children five years old and younger in participating licensed child care centres will see their fees reduced, up to 25 per cent, to a minimum of $12 per day, retroactive to April 1, 2022. In December 2022, parents will see another reduction. In total, fees for families will be reduced in 2022, on average, by 50 per cent, relieving parents of $1.1 billion in child care costs. Families will see further fee reductions in September 2024, culminating in a final reduction to an average of $10-a-day child care by September 2025.

“We have secured a deal for Ontario families that will significantly reduce child care costs for working moms and dads, and that starts today”, said Stephen Lecce, Minister of Education. “We were able to deliver a deal for Ontario families that includes billions in additional funding and a longer agreement that respects parents and provides financial support for families.”

To support the child care sector in implementing these new measures, and to ensure the costs of inflation are covered, Ontario is investing $395 million to ensure RECEs for the 6-12 age group benefit from the wage increases committed to RECEs for the 0-5 age group, as the federal program does not extend support to workers or children age 6-12.

The Ontario government says that it will be working with municipalities to enroll the more than 5,000 licenced child care centres and home child care agencies in the province in the new program between now and September. It says that the rebates, retroactive to April 1, will “follow the enrollment” of the centres and agencies into the new system.

In addition to the two 25 per cent fee reductions planned for 2022, the province says that there will also be further unspecified fee reductions in September, 2024 en route to achieving the $10 a day target in 2025.